Actually I wasn’t planning on blogging about my own work. But my ever-supportive husband said: “You are starting a new project, if not now, when?” So here goes.

First, a quick introduction. Last autumn I went to Venice, on my own, for a month. I wanted to do a photo series about a 17th century poetess, Sarra Copia Sullam. I still do, but for now the plan is on hold, because I came across two other projects – women – that need to come first. I met these women in November, one is a stunningly beautiful prostitute with a grueling past, the other a small girl. I’m going to start with her. This is the story:

My first time on the Canal Grande, I saw a little girl in a porta d’aqua, comforting another girl. They weren’t really there, I knew that, but still. I saw her again and again, that little comforter, and I just knew it: she exists. For sure.

Three years later I was back, still thinking of the little girl. And then I found her.

Her name was Giuseppina Gabriel Carmelo. On November 29th, 1904 she lost her life in a boating accident. Together with a group of women, she was in a gondola that was hit by a vaporetto, late at night and in dense fog, somewhere between Murano and San Michele. Eventually the bodies of all the women were found, but not that of Giuseppina. However, some foggy nights you can see a small coffin floating on the water, with four burning candles on it’s corners. That way Giuseppina warns and protects the boats that need to be out on the lagoon under harsh circumstances. She will bring solace and aid to everyone who needs it in Venice.

My head is spinning as I read Giuseppina’s story. There she is! You can find her in every anthology of Venetian ghost stories. The inhabitants of La Serenissima boast that they have more scary legends than any place else in the world. Some are really hair raising and actually I don’t feel my little girl belongs there. Anyway. I want to shoot backgrounds, so that I can later add a model – my usual work method. But this trip, and these projects, run far from smoothly (neither do I by the way, I’m sporting a crutch due to an injured achilles tendon). I will spare you the details.

And then came November 12th 2019. The worst flood in 53 years. It was absolutely horrific and it stank like hell. The fridge of the girl downstairs filled with sewer water, the lady from upstairs came to the rescue and I babysat for her sleeping child. Orchestrated by Giuseppina probably.

Back in Amsterdam the images enter my head. I’m missing a few backgrounds, but that’s ok, I’ll be going back soon anyway. Or so I thought. I crash with my bike, bruise a rib, all of a sudden there’s this frightening virus in the Veneto. I stay home, lock down, and brood. At last I ask Yona Hartogs (a nine-year old Julia Roberts) to model for me. Luckily she and her Mom agree. I style and sew, costumes and hats, get in the car to drive to their house – battery dead. Ok, the jinx apparently isn’t quite gone yet, but hey, onwards and upwards!

The mooring at San Michele, the cemetery island. In the background is Murano, so this has to be close to the spot where the accident happened.

Stunning house on the north lagoon, overlooking The Spot. It seems a serenely magical place, but I believe it is a party venue.

This is the north-west tip of Venice, not many people know this corner of the city. The houses are mostly new builds, although you hardly notice that. It is a very residential, totally adorable area. I only got to know it because my Italian lessons were there (easyitalianlanguage.com – highly recommended).

It doesn’t get more Venetian than this. All the elements are there: a canal, boats, the ‘altana’ – the roof terrace where the women used to lighten their hair in the sun, after dousing it in urine. There’s a ‘porta d’aqua’, the water door (this one has that typically Venetian pointed frame), the wrought iron window grills there on the left . . . mmmmm, beautiful. 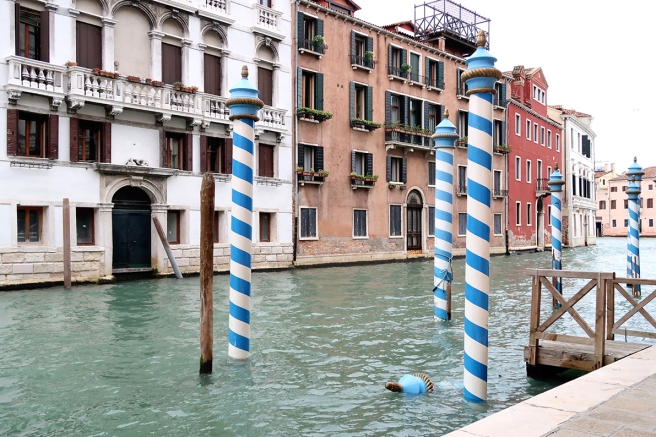 A collapsed mooring pole (is that what you call it in English?). Yeah, they fall over, too. A month later it was still lying there. This, by the way, is also the spot where I dropped my crutch in the water. Swiftly grabbed it, saving it from the poop! (Parts of the sewage still end up in the canals. You get a €600 fine when you jump in.)

And then the water came. It was horrible. Really really frightening. The sound of the sirens – four, highest state of alarm – will ring in my ears forever. These shots are from the next day, when the worst was very much over. I’m curious to see if Giuseppina will appear on the scene, there is a lot to be done.

Our dark hallway. No electricity.

I will give an update every now and then, watch this space.

One thought on “Venice.”