On paper it was highly unlikely that young princess Victoria, born in 1819, would become queen. But every male heir to the throne died so there she was, at eighteen, reigning over the United Kingdom of Great Britain and Ireland. She would do so for nearly 64 years, acquiring an empire as she went along. Her story, and that of the era that carries her name, is really quite extraordinary, and way too extensive for me to even begin to tell here. Luckily the internet is full, chock-a-block, with articles about her, so I can concentrate on these bits, pieces and photographs.

Victoria’s mother had installed a ridiculously strict plan for her upbringing known as the Kensington System. The kid couldn’t move. Literally – she wasn’t even allowed to walk down the stairs without someone holding her hand. Her mother slept in her room, right until Victoria became queen on her eighteenth birthday. The story goes that she kicked Mutti out of the room that very day. For her own sake and that of the nation, a husband was needed. She fell madly in love with her German cousin Albert, and on February 10th 1840 they got married. Victoria wore white, which wasn’t the custom at the time, but she set a trend and we never looked back.

Today we consider the Victorian era the stiffest, stuffiest, uptight period ever, but Victoria and Albert were horny little monkeys – they have nine children to prove it. As far as state affairs go, it seems that Albert hated playing second fiddle, and tried to make his mark as much as he could. At home he instilled a very strict regime for the upbringing of the children. When Bertie, the Prince of Wales and later king Edward VII was a student, the story unfolded that the lad had slept with an Irish actress. Oh, the shame! Albert immediately travelled to Cambridge to set his son straight. After his return, he became very ill and died, aged just 41. Victoria was inconsolable, blaming her oldest son for her husband’s death. She went into mourning and never came out of it, dressed in black for the rest of her long life.

Victoria is the first monarch to be photographed. She and Albert absolutely embraced it, enjoying the newness and modernity of it. They were great patrons of the arts in general, often paying artists an annual salary. Both were keen artists themselves, too. 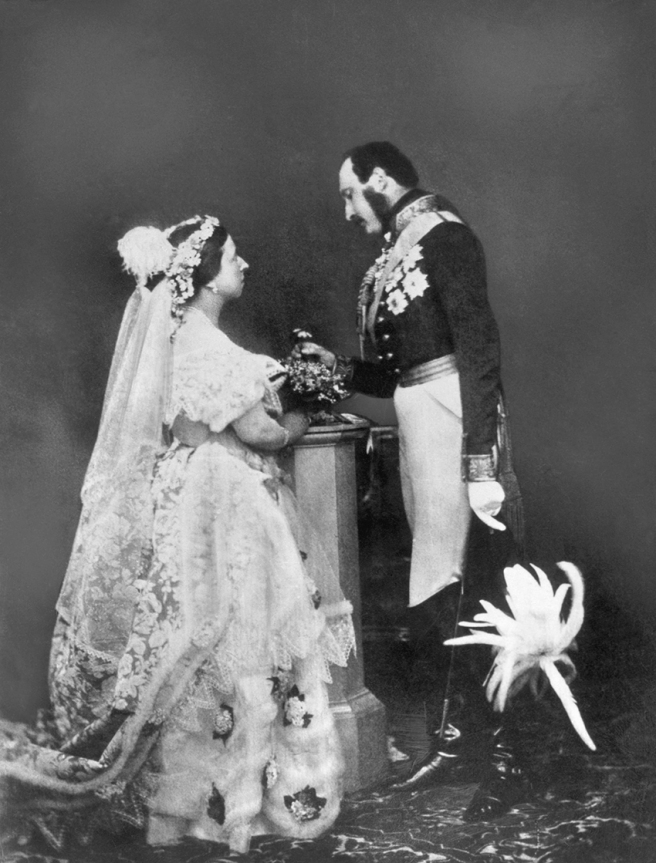 Wedding photo, 1840. See how quick they were to get themselves photographed? The official ‘birth year’ of photography is 1839! (Although in truth the first photo dates from 1826, but still.) And by the way – no, she isn’t kneeling, she was just really tiny. 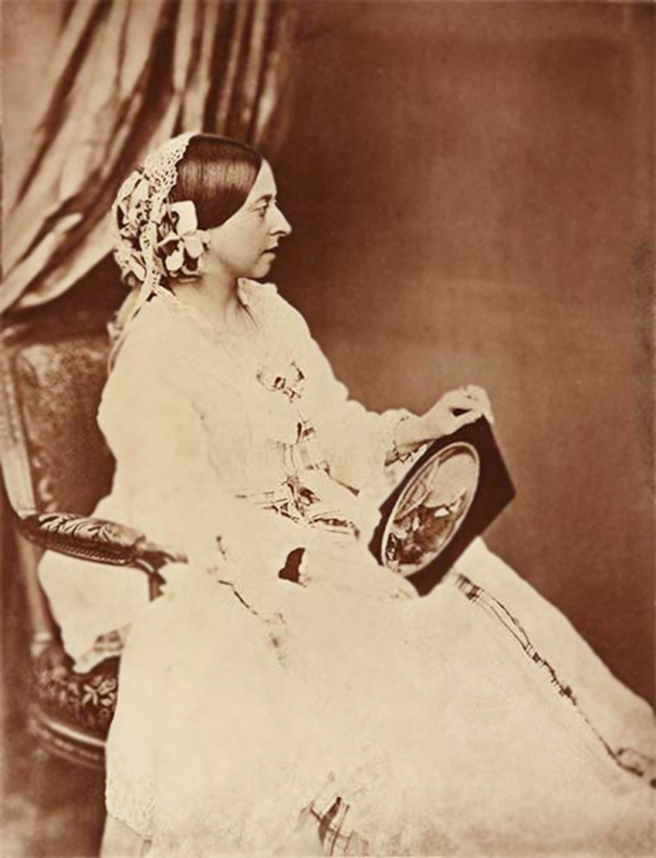 1854, Roger Fenton’s portrait of Victoria holding a portrait. Of Albert of course, who else?

Mom and Dad with all nine children, 1857. There’s a persistent rumor that Victoria didn’t love her children. That seems very harsh to me. I do believe she hated being pregnant, but who knows how difficult her pregnancies were? Who knows how nauseous she was? Who knows if Albert still wanted her with her big belly? 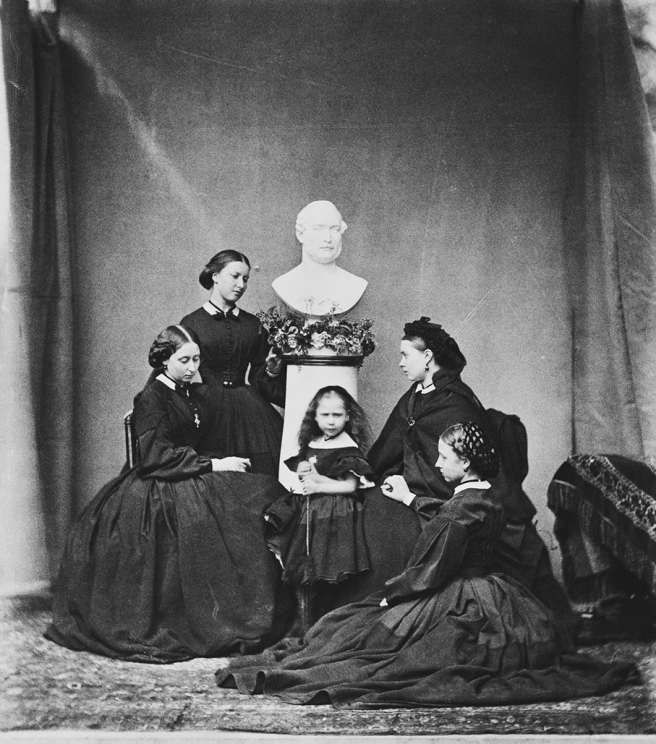 It is 1862 and Albert is dead. Victoria stages a picture of her daughters surrounding his bust and calls it ‘Princess Beatrice Mourning’. That princess being the blurred little one, who obviously couldn’t stand still long enough. But being the baby of the family, she was cut more slack than the others. 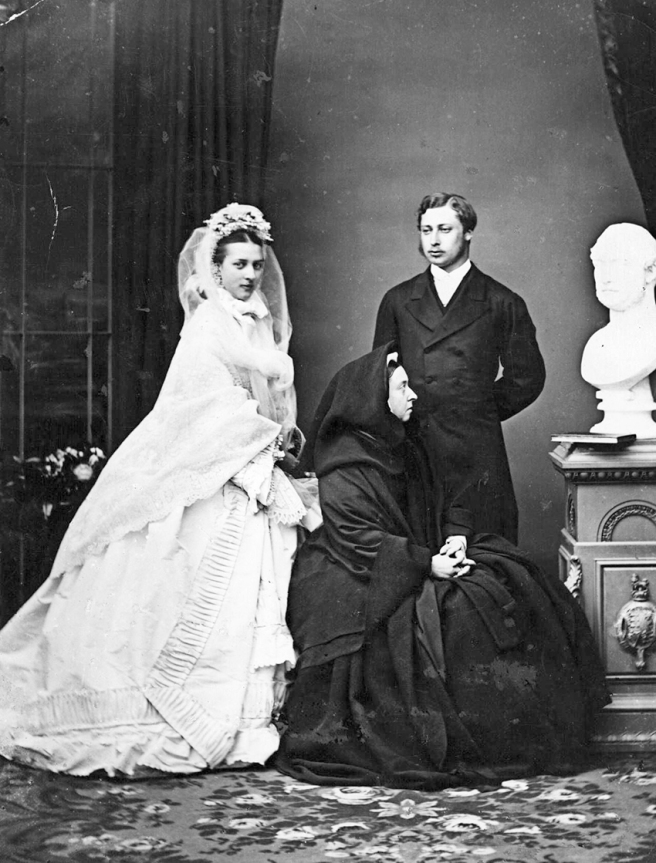 The wedding of the Prince of Wales and Princess Alexandra of Denmark in 1863. I think I would have strangled my mother if she had screwed up my wedding picture like that. But then I my mom was very, very different from Victoria. 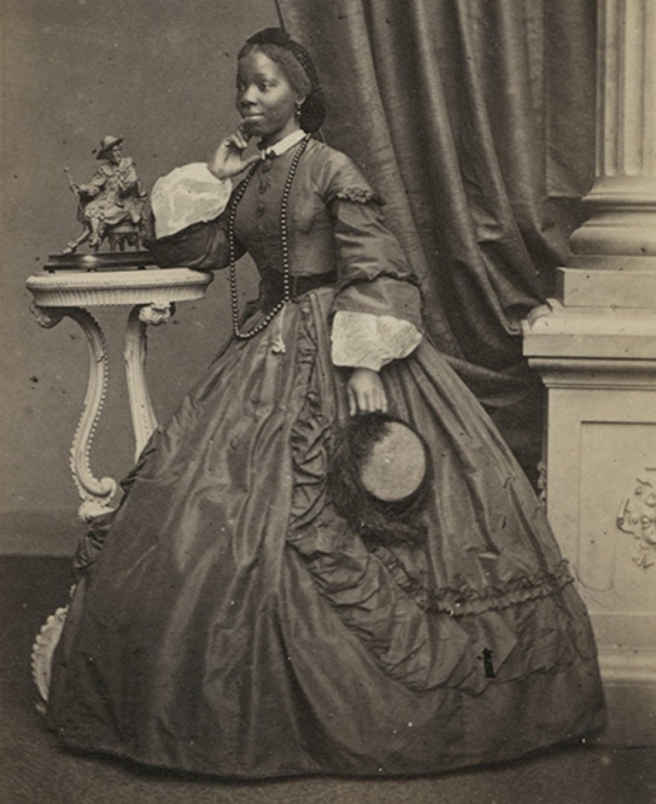 Sarah Forbes Bonetta, 1864. Now here’s an amazing story. Sarah was a West-African princess who, as a small child, lost both her parents in a tribal war. She was sold as a slave and, through the interference of a British sea captain, given (!) to Queen Victoria. The queen declared herself Sarah’s godmother – I have a nagging suspicion she took to her like one does with a cute little pet . . . but it did help Sarah to overcome some of that horrible start in life. She married a wealthy African officer and had three children, always staying in touch with the queen. She died of tuberculosis in Madeira, only 37 years old.

Victoria and the prince of Wales. It is a ‘carte-de-visite’, the precursor of our business card. When photography caught on, people rushed to get their pictures on cards. They idea was that you’d call on someone, hand your card to the maid/butler/door opener, and then Monsieur or Madame could see who was there. And decide if they were home or not. I dare say queens and princes didn’t really need an introduction and I doubt very much they ever turned up on your doorstep unexpectedly. 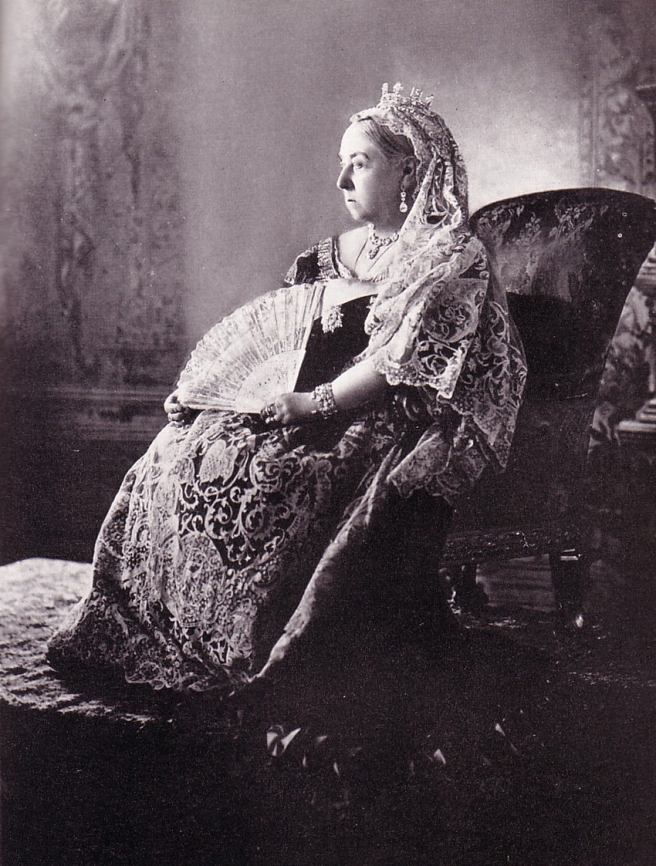 Portrait to commemorate the golden jubilee in 1887. Fifty years on the throne. Over her black mourning gear, Victoria is wearing her wedding veil. Hmmm, I don’t know, isn’t that a little freaky? 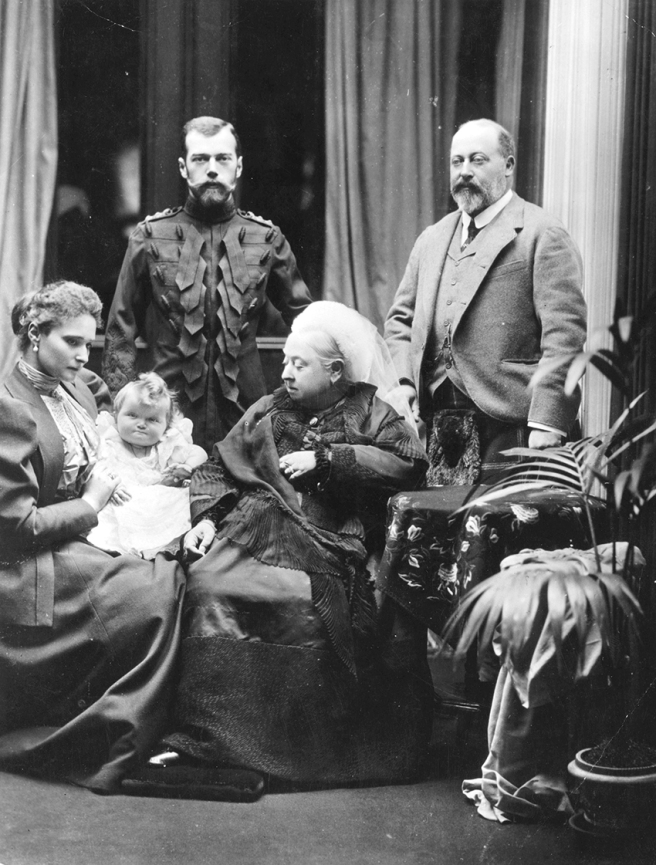 Family gathering at Balmoral, 1896. Queen Vic in the middle, Bertie on the right. The man with all the thingies on his jacket is Tsar Nicholas II, a distant relative. The miserable looking woman on the left is the tsarina (did she foresee what was ahead?) and that very weird baby is Grand Duchess Olga. Queen Victoria was known as ‘the grandmother of Europe’, she was related to pretty much every crowned head on the continent.