“In the still-life the world stops at the far edge of the table.”

from the BBC documentary ‘Apples, pears and paint – how to make a still-life painting’.

Around 1596 Caravaggio made a painting that is generally considered to be the first still-life. Whether that is a correct qualification remains to be seen. Centuries later, when Pompeii and Herculaneum were discovered, it turned out that the Romans had done them too – lavish images to show off their hospitality, their wealth and the produce of their vast empire.

The Netherlands of the 17th century were still-life-crazy. After iconoclasm, the Protestant republic craved secular art to exhibit their endless wealth and exotic imports – just like the Romans 1700 years earlier. Art was owned by the burghers – there was no royalty, no nobility, no Catholic church to claim it. The paintings were literally dripping with abundance. This was the richest nation in the world, don’t forget. However, we were (are?) Calvinists, so somehow we had to curb our bragging. Enter the Vanitas.

“Vanitas vanitatum, omnia vanitas” is a well-known expression from Ecclesiastes meaning “Vanity of vanities, all is vanity”.

A Vanitas painting is filled to the max with symbols. Skulls, hourglasses, clocks are all pretty obvious reminders of mortality, but music too, was a useful symbol, after all, when the last tone ends, everything is gone.

In Spain around 1600 another important still-life culture emerged, especially in the monasteries. In contrast this one was triggered by austerity. They depicted the contents of the larder, the ‘bodega’, and thus are called Bodegones. An important name in this context is the Carthusian monk Juan Sanchez Cotán.

In the eighteenth century the Academies started calling the shots and an institution like the Académie Royale in Paris had a profound disdain for still-lives. In a sense they applied a hierarchy: at the bottom of the pack lies the still-life, then comes the landscape, then portraiture, and then, on top, images of historical, mythological and biblical scenes. Those were considered truly meaningful and prime examples of man’s intellectual prowess. For Jean-Baptiste Chardin, French master of everyday life, it was quite a battle to be taken even remotely seriously. In 1728 he actually received recognition from the Academy (as “valued painter of Animals and Fruits”). No mean feat, for painting what-was-in-front-of-you was hardly considered artistic.

Pompeii, ca. 70 AD. It looks as if Escher was here! That table’s edge does something weird. But it’s a fresco, so even a small change would be a huge hassle. Oh, well, I suppose it could be a recess.

Juan Sanchez Cotán 1602. Those pieces of string make sense – fruit and veg were suspended that way to preserve them. What doesn’t make sense, are the shadows. He painted what he saw, but apparently the sunlight came from different angles every time he got behind his easel. 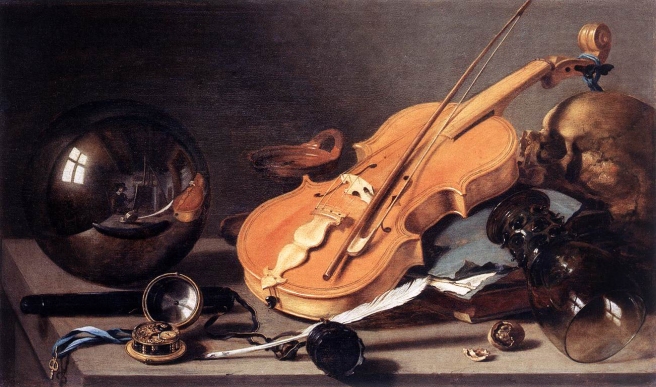 Pieter Claesz. Vanitas ca. 1628. Paintings like this were a showcase, to convince potential patrons of the painters abilities. He mastered it all: glass, wood, reflections (of himself for instance). And with intellectual depth, too.

Jean-Baptiste Chardin, 1728. The Ray. Every day life. Although? A seemingly smiling ray with his intestines on display and a freaked-out cat? 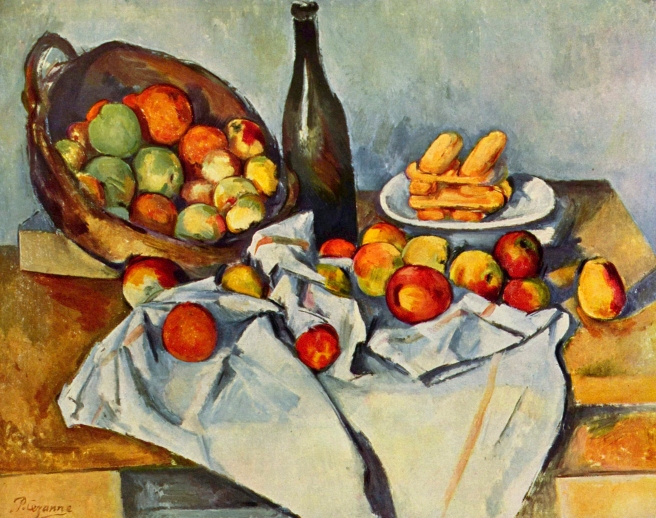 And then came Cézanne. Being the Impressionist he is, he doesn’t paint what he sees, he paints how he sees it. He has this amazing technique that make his still lives initially seem a bit odd, but if you look at them from a distance, or through your lashes, they become extremely real. I’m sure the experts are right when they say Paul Cézanne “painted his angst, motivated by a frenzied perception”. Of course. But clearly he was also a very clever draughtsman who knew exactly what he was doing.

If you look at Caravaggio’s fruit basket like you looked at the Cézanne, it turns into some sort of tapestry. I learned that from David Hockney! From his super interesting book Secret Knowledge. 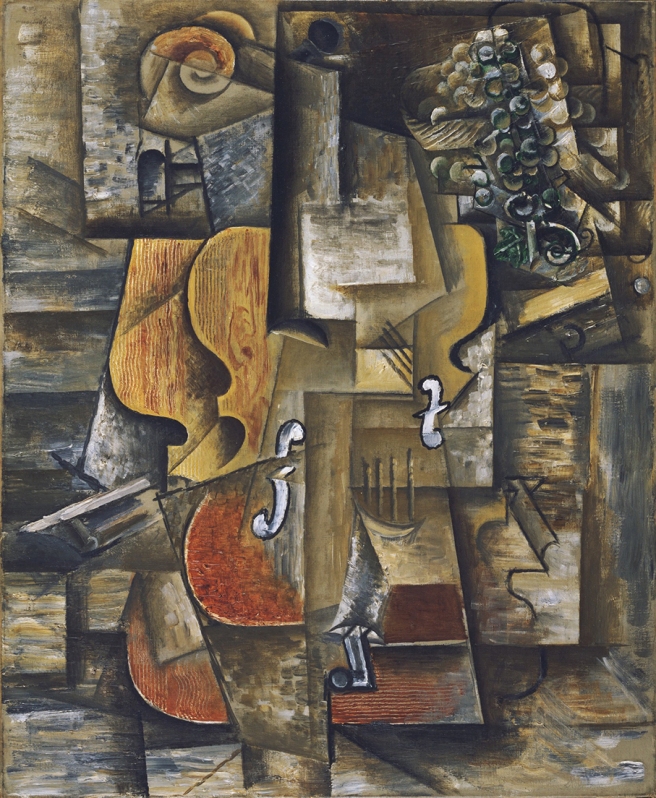 Picasso. Violin and grapes, 1912. Cubism and the still-life are an ideal match – after all cubism allows you to show, on a flat surface, all sides of your subject. 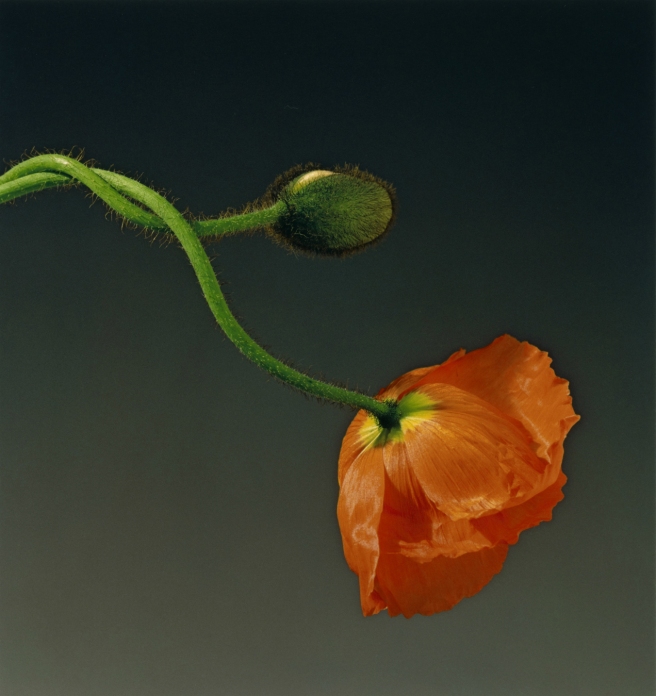 Photography has taken other aspects of the still life under its wings. In advertising of course, but also in contemporary fine art photography. Poppy, 1988. Robert Mapplethorpe. Think he’s known only for his homo-erotic work? Think again. 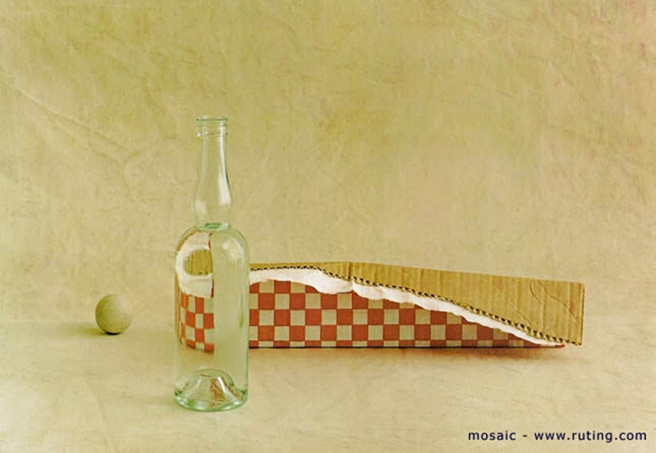 This is by Dutch photographer Peter Ruting. I once introduced him to someone saying, “this is the man who made me graduate from the photo college.” And he said, lovely guy he was: “No, you did that yourself”.

“In the Still-life the world stops at the far edge of the table.”

No way it does.