This talented, wealthy, generous impressionist – who only lived to be 45 – seems to be relatively unknown. That might be explained by the fact that so many of his paintings remain in private collections, for the works that are in museums are quite famous: The Floor scrapers, “Raboteurs de parquet”, at Musée d’Orsay; Paris street, rainy day, “Rue de Paris, temps de pluie”, at the Art Institute of Chicago.

He was part of the Impressionists, not only as a painter but also supporting his less well-off friends and colleagues by buying their work (just like Frédéric Bazille who tragically died, even younger, in the French-German War). 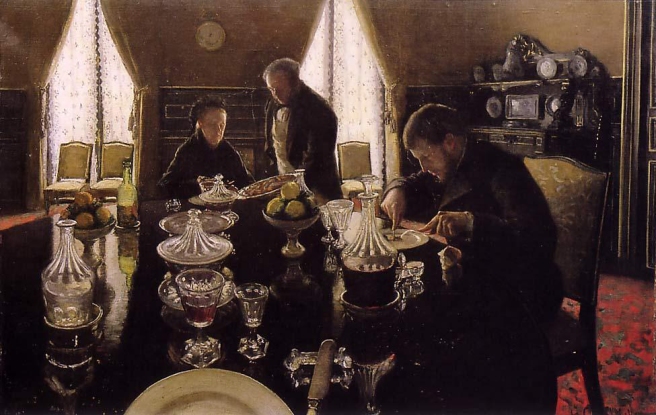 Caillebotte must have had a camera within his head – look at his painting Le Déjeuner. We see the scene from one of the character’s viewpoint. It’s a subjective shot! We are behind that plate, at the table! It was painted in 1876, the influence of photography on painting was huge by then, but this is a particularly amazing example.

It depicts his mother, still in full mourning after the death of his father, and his younger brother René, being served their lunch. All the twinkling in the crystal, the beautifully rendered back-lit luxury cannot disguise the suffocating stuffiness of the house, nor the irritation of the young man. You can hear him sawing through his food, dying to get away.

And yes, this one too, is in a private collection. Can you imagine? Sitting there in your housecoat, rubbing the sleep from your eyes, trying to wake up over a chipped, stained mug of coffee? Watching this painting? Oh, man!

Young man at the window 1875. René Caillebotte at the house in the Rue de Miromesnil. Is he looking at the girl? Does he know her? Does he want her? René died very young, I sincerely hope he managed to get away from that house and have some fun!

Rue de Paris, temps de pluie 1877. Probably his most famous painting, but actually not so very typical for Caillebotte. It’s a little smoother, a bit more pointillistic than what he usually makes. In all honesty, I like the studies he did for the painting better: 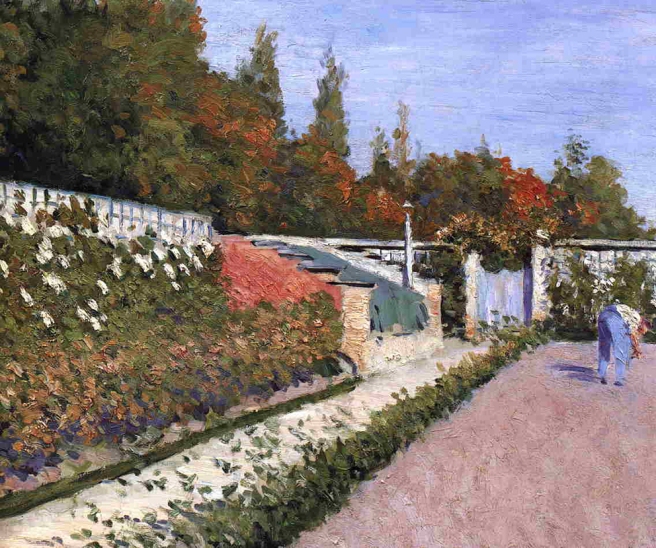 The gardener. No wonder the art-establishment of France despised the Impressionists! A painting of someone’s garden (instead of Arcadia) was hard to digest, but a gardener there? With his butt towards us? Incroyable!

This is the painting that made me fall in love with Caillebotte: View through a balcony. It’s insane! I bet you he was sitting on the floor, looked up, and decided to paint this.

It is from 1880 and, lucky me, is in the collection of the Van Gogh Museum.